What’s Going On in Paris?

Since Saturday 17 November 2018, a protest movement with demonstrations began in France and has subsequently spread to neighbouring countries such as the Netherlands and Belgium. According to Business Insider “Diesel went from an average €1.24 ($1.41) per litre to €1.48 ($1.69,) according to UFIP, France’s oil industry federation, cited by CNN.” This new tax elevated prices by an enormous 16%. As a result of this, the French protest group “Gilets Jaunes,” or the “Yellow Vests,” have lowered Paris to its knees by rioting in the streets, burning vehicles, vandalizing stores, damaging national symbols, and conflicting with police officers.

Why The Yellow Vests?

The members of the Gilet Jaunes protest group wear high-visibility yellow vests ironically in reference to a French law enforced in 2008, requiring all drivers and motorists to have vests in their vehicles when on the road. 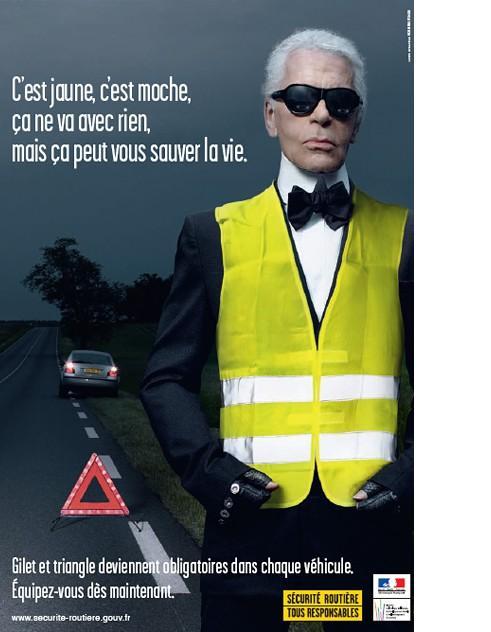 Karl Lagerfeld modelling the new vest. Image caption translation: “it’s yellow, it’s ugly, it doesn’t go with anything, but it could save your life”.

Why The Rise In Fuel?

President Emmanuel Macron’s government justified this increase in fuel prices as a go-green initiative – arguing that it is an environmental strategy necessary to help make the country a low-emission economy. However, protestors argue that he is out of touch and are now calling for his resignation.

According to BBC News, these are the worst riots in Paris since 1968. The cost of the rioting could possibly go up to hundreds of millions of euros. The hostilities sent French politics and media into turmoil. The French government later scrapped the initiative, however, the protesters were still not appeased. The movement has issued more than 40 demands to the French government, a few of which involve pensions, reduced retirement age and numerous changes to the tax system.

Slate.com  stated that many people, including the French, are confused about how three weeks of peaceful protests over a gas price increase turned into the worst riot in decades, beginning and a vehicle focused, rural working-class protest evolving into a “Hydra-headed autumn of discontent, with many objectives, no leaders”. It’s clear that the outrage comes from the fact that the environmental strategies implemented by Macron are an extension of his predecessor, former President François Hollande.

President Donald Trump responded to the French protests calling them a result of the alleged failure of the Paris climate change agreement, inadvertently supporting the yellow-vested protestors. 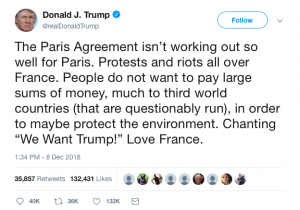 Vox.com claimed that Trump has used the riots in Paris as  “an attempt to twist a major political crisis of ongoing riots which have led to hundreds of arrests, thousands of dollars in property damage, and multiple deaths, to his own advantage”.

President Emmanuel Macron has only been in office for less than two years and has had France on lockdown with French citizens calling for his resignation. He has relented on his environmental policies and citizens are still dissatisfied, demanding more change. It is unclear how this situation will come to an end, however, one this is clear, Macron has lost considerable respect from his citizens.

Brexit: What On Earth Is Going On?