A quote from an old episode of The Simpsons has recently been circulating in response to the fierce debate on gun control taking place in the USA. In the episode ‘The Cartridge Family’, which, despite being over 20 years old remains as bitingly satirical now as it was then, Homer is trying to justify buying a handgun to his incredulous family. When Lisa tries to point out that the Second Amendment is a remnant from a bygone era, Homer corrects her by pointing out that if he didn’t have his gun, “the King of England could just walk in here and start pushing you around!” This is obviously meant as a bizarre and ridiculous statement, but it also sums up how influential the country’s revolutionary past remains in understanding why it retains such a fondness for firearms.

The America’s founding fathers specifically included the right to bear arms in their newly designed constitution with their war with the British in mind. They saw their revolution against their oppressors as a struggle against tyranny, fighting back against an arbitrary government infringing on the rights of its citizens by forcing ‘taxation without representation’ upon them. Having an armed group of civilians, they argued, ensures that if government oversteps its boundaries, it will be met with fierce resistance.

Yet constitutions can be changed. The main reason the possession of guns remains so widespread is less because a mistrust of government underpins American political institutions, than because it underpins American identity. In many ways, the Revolutionary War mindset has been ingrained in the national psyche. The defining moment of the country, the one which brought it into being, was a struggle against tyranny; a struggle which was enabled by the use of firearms. 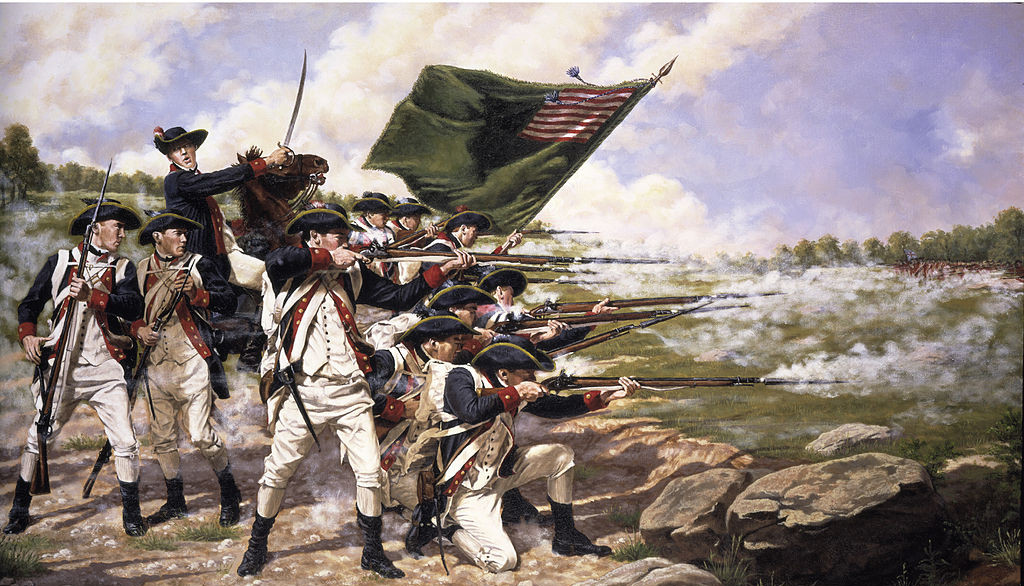 A depiction of the Battle of Long Island, during the American Revolutionary War (Source: history.com)

This is why individual liberty is at the heart of American patriotism. Perhaps more than any other country, the concept of ‘freedom’ and all that comes with it, is heavily glorified and often intrinsically linked with what it means to be American. For many (though certainly not all), guns represent an emotional, even symbolic link to a freedom won centuries ago. Being armed allows free citizens to protect themselves from the government, and any attempts by the government to meddle in gun ownership rights are perfect evidence of the kind of tyranny that make it so essential for people to keep their guns in the first place. That it would probably take a lot more than guns to keep a modern government, with its tanks, bombs and drones, in check is somewhat beside the point for proponents of gun ownership.

This appeal to specific political values of old is not something we can strongly relate to in the UK. In contrast to America, Britain is a country formed by evolution rather than revolution. This means we don’t have any particular moment which provides the political basis of our society; no one historical ideal to be emulated like the USA’s promotion of freedom and suspicion of government. This may be why the idea of widely accessible firearms, so intuitive to many Americans, is so alien to Brits as well as many other foreigners.

Whether America’s strong attachment to history when it comes to firearms is a good thing or not is a matter for fierce debate across the country, particularly in the wake of a tragedy like the one experienced in Florida. Either way, though, Homer Simpson is right to point the finger at the King of England as the source of America’s passion for guns.

Tribalism and the Fight Against Racism in English Football