The lives of black men in the UK have long been adversely affected by negative public perceptions. We are often turned away from jobs because we are not the “right fit”, while on the streets, we are regularly treated by police as dangerous suspects.

In a 2011 study, Media Representations & Impact on the Lives of Black Men and Boys, conducted by The Opportunity Agenda, negative mass media portrayals were strongly linked with lower life expectations among black men. These portrayals, constantly reinforced in print media, on television, the internet, fiction shows, print advertising and video games, shape public views of and attitudes toward men of colour.

Black male achievement is seldom celebrated in the UK mainstream media. Rather than waiting for things to change, we want to use our own framework to do this. It’s consistent with our desire at The Common Sense Network to ‘discover stories from across the political spectrum, local stories, stories that hold power to account, that uncover wrongdoing, that empower the forgotten and the unheard.’

In a wide range of ways, the overall presentation of black males in the media is distorted, exaggerating some dimensions while omitting others. The truth is there are many Black men working hard to do a lot of with a little, changing the world and playing on their own court. Through this series, we want to introduce you to 10.

On the 23rd of July 2020, we sat down with Josiah Hyacinth to find out about his journey and mission.

Strangers describe me as

Close friends describe me as…

Misunderstood. They tell me all the time that people wouldn’t think I’m this complicated.

Only I know that I am…

A fighter. It takes a lot of sacrifices to do what I do. I’m not always happy but I understand that that’s part of the journey. Only I know the pressure of the process. I spend many times in private bursting into tears because I care about a lot for things.

How did this all begin?

My whole creative journey started when I was in university and I was faced with financial problems. Student finance wrongly judged my case and so said I wasn’t eligible to receive any financial support to complete my degree. This meant I had to find a different way to finance my education and pay my rent. During this time, I was living with a photographer and so I thought I could become a photographer too. I had a few friends who were dreamers like me and so when we came to university, we were all eager to start platforms and to try to grow something.

I was working on a platform for Young Athletes, so that was my first introduction to a camera. Whilst out one night, I heard someone say they needed a photographer. I did quick maths and realised there was an opportunity to make money to support myself during the financial situation from SFE that I said yes to photography. I began shooting and learning and that was why and how I started. The transition was also easier because my friends were photographers

I also started a YouTube channel around this time. The aim was to grow to 30,000 subscribers by the summer, which I did. I was just in the process of learning and trying different things out. The pressure of student finance was what helped me grow and evolve. I became very passionate about learning and passionate about growing and so I got really infatuated with excellence.

How have things been since you started?

I received some amazing support when I was first growing the channel. I was one of the first few black lifestyle male bloggers in the UK at the time and so, it was exciting because I was growing fast every day. I received a lot of hate because I was a free Black boy and a lot of people were not familiar with seeing that. A lot of the hate was based on how I used to dress but also some people were buying into the carefree narrative too. I was bullied because I liked expressing my emotions but I decided I was going to succeed early on. I didn’t see a lot of Black makes in the YouTube space and so that’s why I decided to join.

I just kept on sharing and I was seeing things grow. I made people laugh and that was really what I wanted people to do. I’m here to make you laugh and hopefully think.

I’m here to make you laugh and hopefully think

What do you hope to achieve with this your ambition?

I want to become the most influential creator in the UK.

I want to do things that actually influence peoples lives. When I went through the Student Finance situation, it led to them making some changes. Student Finance went through some sort of audit. It also led my university’s Vice-Chancellors holding various meetings with student finance too. I got the opportunity to speak to a lot of senior people and as a result of all of this, Student Finance changed some of their processes. Seeing some of this happen was amazing.

I want to be able to develop incredible ideas and to help people tell their stories.

What’s surprised you so far about your personal journey?

There is so much expectation and, on occasion, that’s been hard for me to come to terms with. It’s also been surprising to see just how much of an impact social media can impact your personal mental health and reality. I would never have thought what people say online would really affect you but it has done so and now I was to help the next generation.

What are some of the ways you’ve made an impact thus far?

Raising money for the Go Fund Me campaign was a big moment. As I said earlier, progress with Student Finance was also a big moment for me.

One of the biggest ways I’ve made an impact so far has also been in starting TRIBE318, an organisation all about educating and protecting entry-level creatives. We have been equipping them to avoid the mistakes I made early on in my journey. I also mentor young creatives, helping them navigate the creative spaces and maximise the impact of their work. There have been some great success stories. I’ve connected creatives around the world, ran initiatives across the UK, Canada and Australia.

I went through a period when I was speaking to a lot of people who were suicidal. A lot of the people I ended up in the same space with – that was a personal victory for me

Having a family that has access to a better life than I may have had. I mean education or opportunities. Being able to fund my lifestyle with my ideas and projects.

I’m not overly driven by money. For me, it’s about family and building for the next generation. I want to open a school for young creatives in Nigeria – people who don’t have access to what I had access to here

What can we look forward to from you?

I’m looking forward to writing a book that will share some of the lessons I’ve learned throughout my journey of new beginnings. An open reflection on some of the most pivotal moments I’ve experienced so far

With Tribe318, I want to partner with more organisations so I can offer more opportunities for creatives. There are a lot of personal things but those are a few things you can expect in the near future. 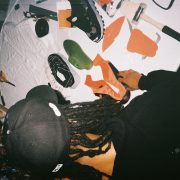 Meet Junior Clint, a footwear designer inspiring change in others