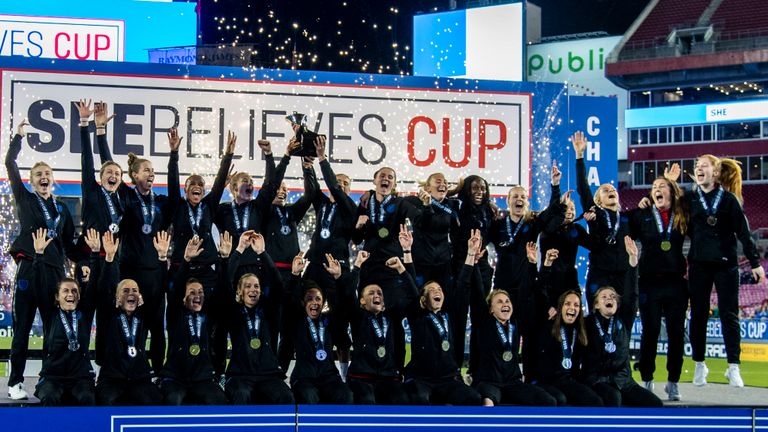 An eye-catching 3-0 victory over Japan means the Lionesses can look forward to France 2019 with a sense of unrivalled optimism.

So on Tuesday England fans finally got a taste of what’s been coming for the last five years: some silverware. Beating Japan meant the Lionesses claimed their first trophy since the Cyprus Cup in 2015, in what is arguably their first ever ‘major’ tournament victory. While still being invite only and technically classed as a ‘minor’ event, the calibre of opposition at the SheBelieves Cup speak for itself. For England to come away with a draw against world champions USA and convincing victories over Japan and Brazil, is very impressive indeed. Travelling to France in June, there must surely be no better chance for this team to claim something which has so far alluded them since their inception in 1972: a world, or European championship.

If there’s one thing the SheBelieves Cup showed, it’s that the team’s performances are improving, especially against quality opposition. This will be music to manager Phil Neville’s ears, who said after Tuesday’s game:


“I wasn’t that bothered before the tournament whether we won or lost, I just wanted to see an improvement and we go home knowing we are definitely going in the right direction.”

Neville is obviously not one to get carried away, but the manner of England’s victories against Japan and Brazil must surely give him cause for excitement. In a scintillating first half performance, England simply blew Japan away. They were quicker, stronger, played with more intensity and managed to do all of this without sacrificing their slick passing game. It will have been even more satisfying for the team after their last minute defeat to Japan in 2015’s World Cup semi-final after Laura Bassett’s unfortunate own goal.

Perhaps what will please Neville most of all however, is England’s performance against USA. During the 2018 tournament – Neville’s first in charge – England were lethargic and stunted against the Americans and fell to a 1-0 defeat which, in truth, could have been far worse. This year however, in a 2-2 draw, England really pressed and took the game to their opponents. I suspect the players would have ended the contest disappointed that they did not leave with three points, having led twice in the match.

What more do they need?

A great positive for the team, is that they still have key players to return before the summer. Midfield stalwarts, Jill Scott, and Jordan Nobbs, both missed the tournament, although Nobbs sadly will miss the World Cup too after her ACL injury in November. Izzy Christiansen was also forced off against Japan, but Phil Neville will be pleased with how well his midfield performed nonetheless. 21-year-old Kiera Walsh has proved a more than able deputy and provided the ‘pass of the tournament’ for Beth Mead’s goal against Japan.

Mead is part of an embarrassment of riches up-front for England, which comes with both positives and negatives. Jodie Taylor is only just coming back from injury, but when fit she will surely lead the line in France given her excellent England record (17 goals in 38 games). In Fran Kirby, England possess a bonafied world class no.10, but from there the selection becomes difficult. Mead is in tremendous form and both Nikita Parris and Toni Duggan will be knocking on the door. While competition for places is to be encouraged, Neville needs to manage this situation appropriately to ensure a settled squad over the next three months.

Where England have been criticised in the past is in defence and some uncertainty still remains. Both the USA and Brazil were able to get at them a bit too easily, which could partly be down to circumstance, with undisputed right back Lucy Bronze forced to play in midfield. If fit, Steph Houghton will remain a constant at centre back, but it is vital that her partner in the centre is addressed before June. Millie Bright is the favourite, but after missing out this time through injury, she must be blooded back into the team as soon as possible. Otherwise, Neville cannot afford much chopping and changing and should stick with Abbie McManus.

Looking ahead, England will certainly fancy their chances in the summer. With Scotland, Argentina and Japan in their World Cup group, the team will take great heart in already knowing that they can comfortably beat the most difficult opponent in that bunch. Currently sitting fourth in the world rankings, this week’s win may see them rise higher and they could very well head into the World Cup as tournament favourites. Ultimately, this is the biggest obstacle standing in their way. Do they have the mental strength to succeed, or, just like the men’s squad for the last 50 years, will they crumble at the last moment?