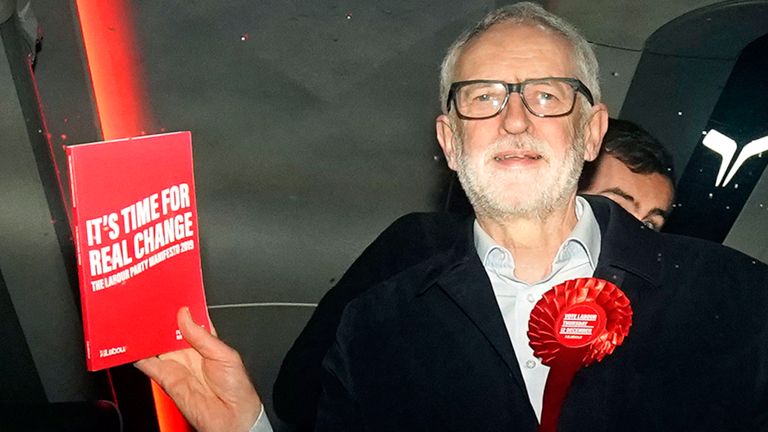 ‘The worst result for Labour since 1935.’ This summation is a haunting reality which Labour MPs must now deal with after the catastrophic defeat last Thursday which has prompted deep soul-searching in the party.

After the polls closed and counting began, the exit polls accurately forecasted a grim night for Labour. Many woke up to a nightmare of almost biblical proportions. Labour won 203 seats in the election, down 59, and saw its share of the vote fall by 7.8 percentage points to 32.2%, while the Conservatives won 365 seats, up 47, with 43.6% of the vote.

“It does look as though this One-Nation Conservative government has been given a powerful new mandate to get Brexit done,” a jubilant Johnson said after he was easily re-elected to his seat in Uxbridge and South Ruislip.

The Prime Minister said that his party’s victory would provide a “chance to respect the democratic will of the British people, to change this country for the better and to unleash the potential of the entire people of this country.”
Labour leader Jeremy Corbyn, on the other hand, appeared solemn as he announced he would not be leading the party into a future general election. Labour totalled just 201 seats (a net loss of 57), the lowest tally since Clement Atlee, who would go on to become premier in the aftermath of World War II, won 154 seats in 1935.

Nobody knows what happened

After four consecutive election defeats, with its support base eroded in the traditional working-class heartlands of South Wales and the North, Labour must realise that it faces extinction. This may seem far away, but with changing party types and weak leadership, this is a very real possibility. Just ask the Liberal Democrats.

Despite this, the current Labour leader, Jeremy Corbyn, not only fails to see this existential threat, he says we “won the argument” last Thursday and need just one more heave for the electorate to come to its senses.

Some in Labour seemed surprised and deeply troubled by this response. Most notably Tony Blair who called on Labour members to abandon the policies and political leanings of Jeremy Corbyn to ensure the survival of the party. In a provocative intervention, the three-time election-winning former prime minister said that if Corbyn’s wing of the party remains in charge, then Labour will be finished as a political force. This is a sentiment, I, as an independent political commentator share.

Corbyn’s comment that he won the argument is a total and utter farce and merely a movement of the goalposts.

What is a leader?

Patronising as it may sound, I find it may be helpful to remind people of what it means to be a leader of a political party. The enduring purpose of political parties has and will always be to win elections and govern. Without winning, you cannot govern and your polices remain wishful thinking. This does not benefit anyone and makes things worse.

A competent political party leader galvanises other MP’s around them and is ideologically capacious enough to allow for many differing MP’s to follow and fall under their shadow. What we have seen for Corbyn is a shallow and rigid leadership. A sort of ideological bully who only has time for MP’s who share this ideological perspective.

As Blair told Newsnight on Wednesday, “The Labour party, by its self-indulgence – and that’s what it was in the end – was the effective handmaiden of Brexit. It’s not our fault, because the fault is with those who advocated it. But our combination of misguided ideology and utter incompetence allowed it to happen.”

The fact that Corbyn thinks after 9 years out of office, labours supporters will be happy with virtual signalling and moral posturing, displays a thin understanding of the political party machine. Labour needs to win otherwise the country may be unrecognisable by the time they next win political office. It also needs to be a credible and effective opposition, something that has so far alluded Corbyn.

The great irony of last week’s election is that a credible, traditional Labour party, one led by a sensible centrist, could have won. After a decade of deep cuts to public services, anaemic growth and Brexit uncertainty, even prime minister Boris Johnson was desperate to distance himself from the Conservative record he has been intrinsically a part of. They sought to spin the narrative, vouching to reverse previous cuts and heavily invest in public services.

Any serious opposition with an electable leader and a plausible plan for the government should have been able to win the chance to serve the British people. Labour could have forcefully made the case that it would fix a society that the Conservative broke. Instead, it focused on winning the argument and moral superiority. And the blame for that defeat is of course…the media. Blaming media bias or Facebook skulduggery is the sound of a party refusing to face reality. It also the sound of a party that is in no way ready to win and govern. It is reminiscent of a party that has forgotten how to win.

We don’t trust you

Labours defeat is especially crushing when you account for who Corbyn was against. Boris Johnson is arguably the most morally bankrupt leader Britain has had. When described by Max Hastings, his previous employer in the Guardian he said, ‘I was Boris Johnson’s boss: he is utterly unfit to be prime minister.’

Hastings said ‘Corbyn is far more honest, but harbours his own extravagant delusions. He may yet prove to be the only possible Labour leader whom Johnson can defeat in a general election. If the opposition was led by anybody else, the Tories would be deservedly doomed, because we would all vote for it”

How sad then to know that faced with a choice between Corbyn and Johnson, the British electorate chose to trust Johnson and gave him a thumping majority. It seems despite the chest-beating about the moral argument, Corbyn lost the argument about trust. The British electorate trusted Johnson to deliver Brexit and simply did not trust Corbyn to bring to life all the promises in Labours exhaustive manifesto. This means Corbyn lost the most important argument, the one that ultimately resulted in who would win the opportunity to govern. Asked about the leader for today, the British people chose Johnson.

There is a place for people like Corbyn; it is not in party politics. Believe what you want as the reason. Perhaps he has transcended party politics or is too virtuous to be sullied by political manoeuvring or lacks energy and passion. He is an effective protest politician, a leader of a campaign or pressure group, winning hearts and minds to a moral cause. There he can worry about the argument and not political office. The cost of his leadership has been far too great for millions across the country.