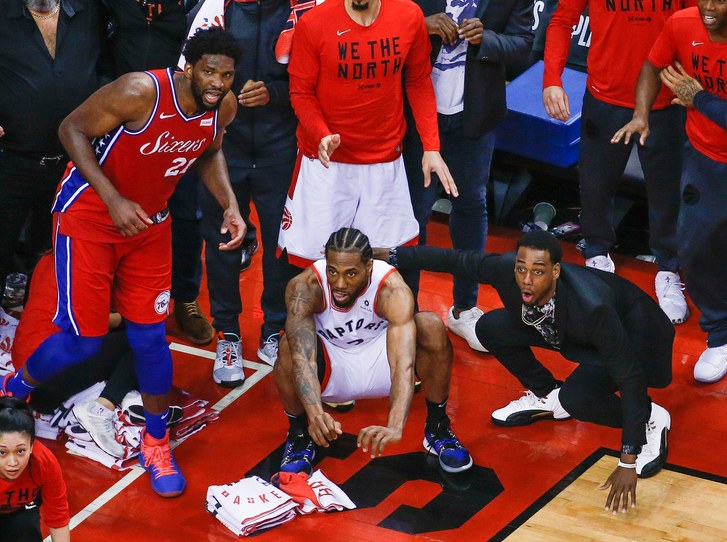 According to the Sports Business Journal, the NBA Playoff ratings were down 18% after the second weekend of games across TNT, ABC, ESPN and NBA TV. The obvious reason of course being the absence of Lebron James. But in a Playoffs filled with buzzer beaters, shock defeats and all the emotion, the Playoffs might still be just as much fun without the ‘King’.

With the absence of Lebron James, games are more competitive in the Eastern conference as James was always known as the dominant force, especially against the formerly known Lebronto Raptors.

As it pertains to the West its always been a survival of the fittest conference and certainly this year it’s even more true than normal with both OKC and the Denver Nuggets losing to the Blazers.

With both these teams being arguably the better teams in the east, we will finally get to see who is top dog when Giannis Atentetokumpo and Kawhi Leonard face off against each other.

The Bucks have had an easier second round compared to the Raptors. With the Bucks beating the Celtics 4-1 and the Raptors having to go to Game 7 at home, needing a walk off buzzer beater from Kawhi Leonard to clinch a spot in the conference finals. Leonard put the Raptors on his back and it was almost Jordan-esque how resilient and dominant he was in this series.

A rare occasion of Joel Embiid looking very emotional at the sight of his team having an early off-season. The Raptors fought hard and showed grit against the 76ers. The Bucks were able to quickly adjust after losing Game 1 with Boston Celtics legend Paul Pierce already proclaiming the series over.

Giannis was excellent averaging 28 points and 10 rebounds in the series and showed why he’s the MVP of the league against a talented team. Kyrie Irving had a disappointing series and game 5 was bitterly disappointing, only managing 15 points and 1 assists. It’s safe to say that he wont be staying in Boston come next regular season.

The Bucks who hold the best record in the NBA will certainly be ready to go up against the Raptors. With plenty of rest and time to evaluate what their game plan will be against Kawhi, it will give them a slight edge and possibly a win in the series. It’s almost certainly going to at least 6 games.

The Raptors are sure to feel confident in their hard fought battle against the 76ers. Additionally, the conference finals presents the perfect opportunity for under-performing players like Kyle Lowry and Serge Ibaka to redeem themselves after a poor series.

The Golden State Warriors managed to ward off the Houston Rockets in six games, winning 4-2 and having to play halfway through game 5 and all of Game 6 without their best scorer in Kevin Durant.

It seemed a tall order for them to clinch the series without going to a game, but Klay Thompson kept them in the first half as Steph Curry amassed 0 points, but erupted in the second half with 33 points and a whopping 23 in the 4th quarter.

In the last 5 mins of the game, Curry scored the same amount of points as the whole Houston Rockets team which was 16. Chris Paul finally turned up scoring more than 20 points but it wasn’t enough, as we were all reminded that the Warriors were a champion team long before Durant arrived in the Bay.

The Portland Trailblazers became part of the 21% club of teams who have won a game 7 series away from home. With a monster performance from CJ McCollum who scored 37 points he was able to claw back the 15 point deficit to finally give the killer dagger in the 4th quarter.

Damian Lillard had a horrendous shooting night especially in the first two quarters. He couldn’t buy a shot and it seemed that he might follow suit in the same manner of Stephen Curry but in the end Lillard only managed 13 points, with 10 rebounds and 8 assists.

Two of the best back courts will face each other in the Splash Brothers Curry and Thompson to the Blazers McCollum and Lillard. They’ve faced each other plenty of times in recent years and unfortunately for the Trailblazers it’s not a pretty tale, with them losing every single time and even being swept in 2017 and losing 4-1 in 2016.

Frankly the Splash Brothers are better shooters than the Lillard and McCollum and individually Thompson and Curry have had bigger moments. This will also be a great opportunity to see the Curry brothers face off against each other which will be sure to produce a proud father moment in Wardell Stephen Curry, former NBA player for the Charlotte Hornets.

The Trailblazers will be the underdogs in this series and if they can stretch it to a 7 game series then they can prolong the inevitability of Kevin Durant returning from injury. The Warriors will feel they are matched up particularly well and will have to dig deep to their 73-9 days to play at their best.

Making predictions for these series are easy but as we’ve seen between the Rockets vs Warriors and Raptors vs 76ers, entertainment will be provided and twists and turns are awaiting all the teams in the Conference finals. No Lebron, no problem.

Is the English Premier League the Most Competitive in the World?