Why Alex Jones had to go

Alex Jones is the latest high profile figure to be confronted with the reality that freedom of speech does not mean freedom from the consequences that come with that speech. His inflammatory rhetoric has caused enough harm to the likes of Facebook, Apple and YouTube to remove his content from their sites, after he defied various bans from the aforementioned platforms.

On 6th August, the far right political pundit and radio host was banned by Apple, YouTube and Facebook, for offences such as “repeated violations of community standards”, and what Spotify labelled as “hate speech”. Mr Jones is widely popular, with his main site Info Wars attracting 30 million page views per month. For context, mainstream media sources such as MSNBC attract 40 million page views on their website. United States President Donald Trump has even appeared on one of his broadcasts, praising him for doing a “great job”.

He has gained notoriety for his sensational conspiracy theories, such as his claims that the 2012 Sandy Hook Elementary School shooting, which claimed the lives of 20 first graders, was a ‘false flag operation’ set up to strip the second amendment rights of American citizens. He even went as far as accusing the grieving parents of being ‘crisis actors’, complicit in the government coordinated plot to use the shooting as a justification for disarming the American population.

Clearly, these asinine claims are incredibly hurtful to the victims of these ‘false flag’ operations. Two bereaved families have filed defamation lawsuits against Jones, seeking more than $1 million in damages due to the false claims being propagated. Alex Jones supporters have harassed the bereaved families, leaving threats on voicemails.

Unbelievably, Alex Jones believes that the defamation suits amount to defamation against him, complaining that “you’re allowed to question things in America”, and that any suggestion that he “hates the families” of dead children are “lies”.

Jones is also the subject of a lawsuit from Marcel Fontaine, whom he falsely identified as the Parkland School massacre gunman. He circulated a picture of Fontaine wearing a t shirt with satirical images of communist leaders, and fingered him as an accomplice in yet another false flag operation. Incredibly, due to Info Wars discouraging its followers from trusting mainstream media outlets, the indictment and prosecution of Nikolas Cruz as the alleged shooter “has not removed the (life endangering) threat” to Fontaine’s life.

Alex Jones has accused Robert Mueller, the special counsel investigating President Trump’s links with Russia, a “paedophile”, and fantasised about “bang[ing] heads”  and shooting him or “dy[ing] trying”.

This is precisely the nature of the ‘hate speech’ Spotify refers to, that places innocent people in harms’ way because of fictitious claims made by someone with such a large platform.

Facebook and YouTube need not retain his content, with the former releasing a statement that they have taken down some of Jones’ content for ‘glorifying violence, violating graphic violence policy, and using dehumanising language towards Muslims immigrants and transgender people”. The measures taken are a welcome step in the right direction, considering Facebook in particular has not been on the ball on this issue

A Channel 4 investigation revealed that the accounts of far right organisations such as Britain First have been ‘shielded’ from deletion, even in instances where their content would have seen a normal user facing harsh action.

Clearly, there must be more consistency in the enforcing of Facebook’s community standards. Earlier this year, a whistle-blower accused YouTube of promoting conspiracy videos akin to that of Info Wars and the Alex Jones Page via its recommendation algorithm, which some believe had a big influence on the outcome of the 2016 U.S general election. Officials from Twitter, Facebook and Google have been called to testify before a House Intelligence committee hearing on Russia’s use of social media to influence the election.

It is refreshing to see major media platforms finally take a stand against the likes of Alex Jones. His freedom of speech does not extend to protection from consequences that will arise from defaming vulnerable members of the public, stemming from clear falsehoods that are designed to incite violence.

Are unsympathetic doctors to blame for low smear test turnout? 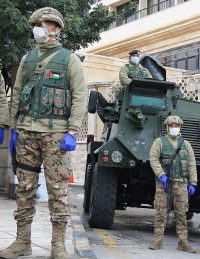