What’s love got to do with it? Supreme Court refuses to change UK’s ‘outdated’ divorce laws

The Supreme Court has ruled that a divorce cannot be granted simply because one spouse is unhappy. It has rather placed responsibility on Parliament to reform the UK’s divorce system, which has become increasingly hostile in character when a party to the marriage opposes their partner’s divorce petition, insisting that the marriage should continue. 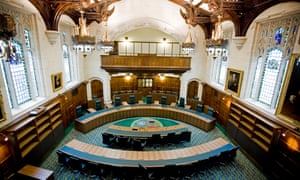 The UK Supreme Court, highest ranking court in the country (Source: The Guardian)

The role of the Supreme Court, and the judiciary as a whole, is to interpret and apply the law to specific cases, and cannot amend the law to address perceived injustices. They leave that to elected legislators in Parliament, to ensure a separation of powers, which is crucial to a fully functioning democratic state.

The court heard an appeal from Mrs Owens, who had been married to her her husband for 40 years, having two children in that time. She said she had been contemplating a divorce since 2012, and finally decided to move out and separate from her husband in February 2015. According to the law, there are five grounds on which one can petition for divorce; desertion, adultery, unreasonable behaviour, living apart for 2 years if both parties agree to the divorce, and living apart for 5 years if one party does not consent. Mrs Owens alleged that the marriage had broken down due to her husband’s unreasonable behaviour and crucially, that she could not reasonably be expected to live with him.

Mr Owens refused to agree to the divorce, and denied he had behaved in an unreasonable manner, and blamed any supposed breakdown in their marriage on an affair she had, or because she was ‘bored’. In this case of a contested divorce, the Supreme Court had to examine all the evidence, determine what Mr Owens did and did not do, assess the effect of his behaviour on Mrs Owens and make an evaluation as to whether it would be unreasonable to expect Mrs Owens to continue to live with him. The Court decided that the marriage had indeed broken down, but that the 27 examples she gave of Owens being moody and disparaging of her in front of others were ‘flimsy’ and ‘exaggerated’, and dismissed the petition for divorce.

For now, Mrs Owens must remain married to her husband because a group of judges decided it wasn’t unreasonable for her to live with him, despite knowing full well that the marriage had broken down. This is an uncomfortable situation for critics of the fault-based divorce system, which gives judges the ability to reject a divorce petition based on a lack of ‘fault’ of the other party. The Ministry of Justice released a statement acknowledging that “the current system of divorce creates unnecessary antagonism in an already difficult situation”, and promised to “look closely at possible reforms to the system”.

There is an argument that it is important not to avail divorce ‘on demand’, and Mr Owens’ solicitors have warned against chastising him for ‘trying to save his marriage’. Mrs Owens’ solicitors claim that she should not have to prove that her husbands’ behaviour was ‘unreasonable’, but merely that the marriage had broken down, and she should not be expected to live with him. Celebrity divorce lawyer Baroness Shackleton claims that couples have to either “exaggerate” or “agree” to a divorce, to avoid the conflict seen in the case of Owens v Owens.