Race to the Clouds, the Pikes Peak Challenge

The Pikes Peak International Hill Climb is an annual Automobile and Motorbike event held at the Pikes Peak course at Colorado, USA. It involves drivers racing their vehicles to the top of the peak essentially making it a hill climb. One can imagine it’s similar to the timed attempts at the Nurburgring with the exception of it being a start to finish course and not a circuit (and of course the obvious hill element). Another feature is the fact that each driver is only allowed one race attempt and a few test attempts. The weather changes in this hillclimb can be drastic given the setting. 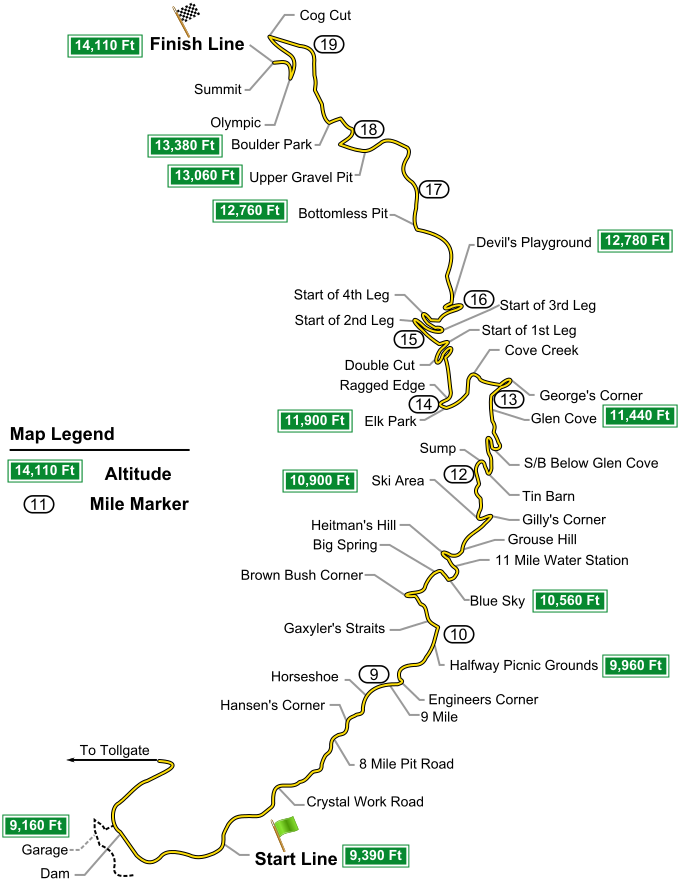 As you can see, in the image above, scaling this gaudy monstrosity within ones motor vehicle class/type is a an achievement in its own right. But being the fastest overall among all the vehicles that competed here since 1916, is nothing short of special.

In October last year, when Volkswagen Motorsport director Sven Smeets was interviewed, he spoke of the race as being a “new beginning for us. We are developing an all-electric race vehicle for the first time. The project is also an important milestone in our new motorsport orientation.”

In short, this is a fresh direction post the emissions scandal. The glaring issue was the fact that Volkswagen had no experience racing at high altitudes. Their last attempt was all the way back in 1987. At that time the course was part gravel, one that required the terrifying and bonkers group B rally cars. To put simply, normal racing tires and cars don’t do quite well in gravel as compared to asphalt due to the varied traction requirements i.e much lower than normal. So we need specialized tires for starters. Secondly, as we climb up rapidly, the engine is starved of air as the air gets thinner and thinner. So without forced induction an Internal Combustion Engine would drop performance in said circumstances.

Volkswagen’s solution was to get their MK2 Golf, one with an engine in front and another engine out back, making this a one of a kind model. Both engines were based on the 16-valve, 1.8-liter four-cylinder units then offered in the GTI. Each carried a turbocharger, and had a mechanical throttle system that would link their outputs as necessary; the driver could choose rear, front or four-wheel drives. And that output was massive – 652 horsepower, enough even with the weight of two motors to catapult the Golf from rest to 62 mph in 3.4 seconds. A 4-wheel drive mode would come in handy during the gravel section per se, so their machine and its flexibility was optimum at the time. During their run, they were leading as well only for a suspension bearing to fail. That effectively ended their challenge.

Now we date to October 18, 2017; work on the factory entry into the Pikes Peak International Hill Climb since the ill-fated 1987 campaign began. Proven winner, Romain Dumas, was chosen to be the pilot. Norma, who have experience building Pikes Peak cars are called upon for a “team-up”. An electric drive train was chosen and experienced technical director François-Xavier “FX” Demaison was at the job. Demaison’s key philosophy being downsizing, i.e reducing weight.

From an Aerodynamic standpoint, we would have to revisit the characteristics of air at high altitudes.  Air becomes less dense as we get higher and higher and the pressure drops. This means beyond a certain point one would have to consider the fact that simulating this in a tunnel would not be possible. Hence the involvement with Ansys makes a lot of sense. The car trades off drag with Downforce, and as we go higher the effect of drag is reduced. An emphasis being placed on cornering and acceleration. As far as efficiency of the cooling cycle goes, it is slashed significantly as the air gets thinner.

“We could not manage this solely with the data from the wind tunnel, where it is not possible to recreate the thin air,” stated Volkswagen Motorsport’s Technical Director, François-Xavier Demaison, in a press release on the I.D. R’s aero development. “The simulation was a great help in determining the dimensions required for the cooling system.” The emphasis on acceleration is due to the fact that in a hill-climb, it’s a matter of maximizing acceleration rather than top speed.

Limited development time (the I.D. R was greenlit in August 2017) meant rapid component prototyping was crucial to the car’s refinement on such a short time frame, forcing heavy use of 3-D printing, according to one of the project’s computational fluid dynamics engineers, Dr. Hervé Dechipre. “We printed about 2,000 parts,” explained Dechipre “In doing so, we saved a lot of time.”

Now bear in mind, the electric record was held by the eO PP100, which raced with almost 1,600 horsepower and 1,859 pound-feet of torque. So a goal weight 10 percent beneath that of the 1,200-kilogram (2,646-pound) record holder was targeted, forcing added complications onto the battery capacity and weight calculations. To keep mass down, two electric motors were used (instead of four), and they are linked by a reduction gear to the traditional differentials at both ends. Regenerative braking would harvest energy during the race. There is no torque vectoring, just a motor and differential at each axle. Heat recycling tech, too, is absent. All in the effort to shed weight. “I always said the best car for Pikes Peak would be electric,” said Dumas. “You have to fight against losing power, brakes, and downforce [at altitude], but you don’t lose power with this car. I’m in love with this race, the mountain is so beautiful. It’s a kind of Nordschleife, but for sure with even more risks.” Pikes Peak’s weather can change violently in a matter of minutes or miles. Even in June there can be sun at the foot of the mountain and snow at the summit. It’s common for sections of the course to be enshrouded in fog.

Volkswagen and Dumas believed they could attain the electric record—maybe even the overall record. At the end video evidence proved it. They shattered the EV record by nearly a minute and the overall crown by 16 seconds.

To quote Colin Chapman, “Adding power makes you faster on the straights, subtracting weight makes you faster everywhere”. And we can only begin to marvel at engineering and racing to the extreme.

Over the last two days, the Foreign and Commonwealth...