We start the new year with civil unrest in Iran. The Supreme Leader blames the Islamic Republic and its enemies for protests and rioting that has lead to deaths across the nation. Ayatollah Ali Khamenei said of the protests:
“In the events of the past few days, the enemies of Iran are deploying every means at their disposal including money, arms and political intelligence support to coordinate making troubles for the Islamic establishment.” 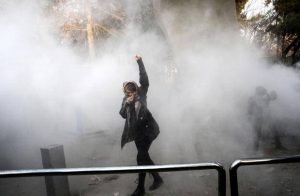 Hundreds have been arrested and the Iranian regime has accused Britain, the US and Saudi Arabia of stirring up protests in the country. The Iranian security forces have taken to firing on crowds and demonstrators as they have attacked police stations. A police officer and a Revolutionary Guardsman have been reported amongst the dead. The current death toll, as of Wednesday 3 January, is 21.

The protests have led to burning buildings, police firing tear gas and there has been unconfirmed video footage on social media showing flash bombs and grenades being thrown into the streets.

BREAKING: Police trucks ploughed into crowd of peaceful protesters crushing them to death in #Ahwaz, then #Basij militias started shooting at the rest. This shocking video is an example for what happened in Iran during Internet blockage hours ago. #IranProtests #FreeIran pic.twitter.com/mhPaBPA8HX

Why are people protesting?

The last time Iran saw such huge public protesting was in 2009 when millions turned out to pressure the government into having a re-run of a disputed presidential election. The protests came after there were huge irregularities in the results. Millions were surprised by the result and, spurred on by government officials declaring that the votes were fraudulent , they took to the street to demand a re-run.

The current protests started last Thursday (28 December) in Mashhad, Iran’s second city, where people turned up to protest against the high prices of basic goods. This has since turned into a nationwide protest with reports saying that it has spread to 50 cities and towns including the capital Tehran. The protests have moved from being just about the price of basic goods to anger at the establishment in general. 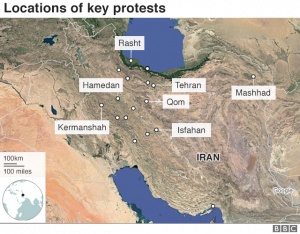 Map of Protests in Iran (BBC)

While it seems that the protests are about current events, it has been a long time coming for the Iranian people. Demonstrators have been venting their anger towards the President, Hassan Rouhani, and his government’s failure to revive Iran’s economy. The government has struggled to make any change in the country’s unemployment and inflation, and there have been many allegations of corruption (notably in 2009 during the elections) which have not been addressed.

There are questions around why the country was spending money on conflicts in the Middle East when it could be used to help people within the country itself.

The deaths and the coming together of cities and towns to demonstrate have moved the protestors from anger at prices of goods to criticising the political leaders, with some protestors chanting “death to the dictator” (i.e. to the Supreme Leader, Ayatollah Ali Khamenei). As the protests intensified, so did the security forces and their methods of dispersal, from using water cannons and arresting a few people to arresting hundreds and firing into crowds.

All social media has been blocked. WhatsApp and Facebook were already blocked in Iran, but now encrypted messaging app Telegram (the main messaging app for many) has also been blocked. Iranian authorities claim that this move to block access is their attempt at making sure videos and photographs of protests aren’t shared online which in turn will stop calls for further protests.

Who is to blame?

Ayatollah Khamenei has blamed the West, saying that the “enemies of Iran” were using their “money, weapons, politics and intelligence services to trouble the Islamic Republic“.

“The enemy is always looking for an opportunity and any crevice to infiltrate and strike the Iranian nation,” Khameni said.

Over the years, Iran has become poorer. A BBC Persian investigation found that “on average, Iranians have become 15% poorer over the past decade, and their consumption of bread, milk and red meat has decreased by between 30% and 50%“.

Growth has been extremely slow and, while unemployment is officially 12.4%, in some parts it is as high as 60%. More than half of the population of Iran is under 30 and they are unavoidably the worst affected.

While some people have taken to twitter to voice their concerns over the events in Iran, the European Union has said that it was monitoring the situation. Whether they will step in is the big question on everyone’s lips.

The #EU is following the demonstrations in #Iran. We have been in touch with the Iranian authorities 1/2

Khamenei has been known to use the term ‘enemies’ to refer to their regional rivals Saudi Arabia and Israel, as well as the US. He feels that the protests are a product of the West’s involvement as they try and destabilise Iran further to eventually make it easier to invade.

Of course, Donald Trump has not made things easier by tweeting about it:

The people of Iran are finally acting against the brutal and corrupt Iranian regime. All of the money that President Obama so foolishly gave them went into terrorism and into their “pockets.” The people have little food, big inflation and no human rights. The U.S. is watching!

Iran is failing at every level despite the terrible deal made with them by the Obama Administration. The great Iranian people have been repressed for many years. They are hungry for food & for freedom. Along with human rights, the wealth of Iran is being looted. TIME FOR CHANGE!

Big protests in Iran. The people are finally getting wise as to how their money and wealth is being stolen and squandered on terrorism. Looks like they will not take it any longer. The USA is watching very closely for human rights violations!

The entire world understands that the good people of Iran want change, and, other than the vast military power of the United States, that Iran’s people are what their leaders fear the most…. pic.twitter.com/W8rKN9B6RT

Many reports of peaceful protests by Iranian citizens fed up with regime’s corruption & its squandering of the nation’s wealth to fund terrorism abroad. Iranian govt should respect their people’s rights, including right to express themselves. The world is watching! #IranProtests

I should start this article with some confessions. I’m one of the many ...

Breonna Taylor was murdered. Or was she? These are the questions that I ...