Not many will be surprised to hear Donald Trump echo the proposals of the infamous NRA (National Rifle Association), rather than taking the opportunity to ban semi-automatic rifles like the AR-15 used in the shooting at Marjory Stoneman Douglas High School.

The shooting at the school in Parkland, Florida, is the second deadliest school shooting in American history. Nikolas Cruz killed 17 people, initially escaping with fleeing students before being caught and arrested in a nearby town. Cruz, who had previously been expelled for “disciplinary reasons”, bought an AR-15 legally and was known to shoot at chickens, and had previously threatened to take part in such an attack.

Trump claimed that arming teachers could prevent school shootings in the future, and that a teacher with a gun could end an attack “very quickly”. During the 2016 election campaign, Trump denied that he was in favour of guns in classrooms, blaming ‘Crooked Hillary’ for spreading such lies. Now he claims that teachers should have a “concealed gun on them”, ensuring that the schools are no longer a “gun-free zone”, making them safer in his view.

Very sad that the FBI missed all of the many signals sent out by the Florida school shooter. This is not acceptable. They are spending too much time trying to prove Russian collusion with the Trump campaign – there is no collusion. Get back to the basics and make us all proud!

He also called for improved background checks on gun buyers, so that those who are ‘mentally ill’ will find it more difficult to get their hands-on guns.

President Trump met with about 40 students, teachers and families in the executive mansion’s state dining room, who all urged him to reform the nation’s gun laws. Andrew Pollack, father of Meadow Pollack, who was killed in the attack in Florida, claimed that “we, as a country, failed our children”. Mark Barden, whose son Daniel Barden who was killed in the 2012 Sandy Hook Elementary Shooting, said that “schoolteachers have more than enough responsibilities right now, than to have to have the awesome responsibility of lethal force to take a life”. 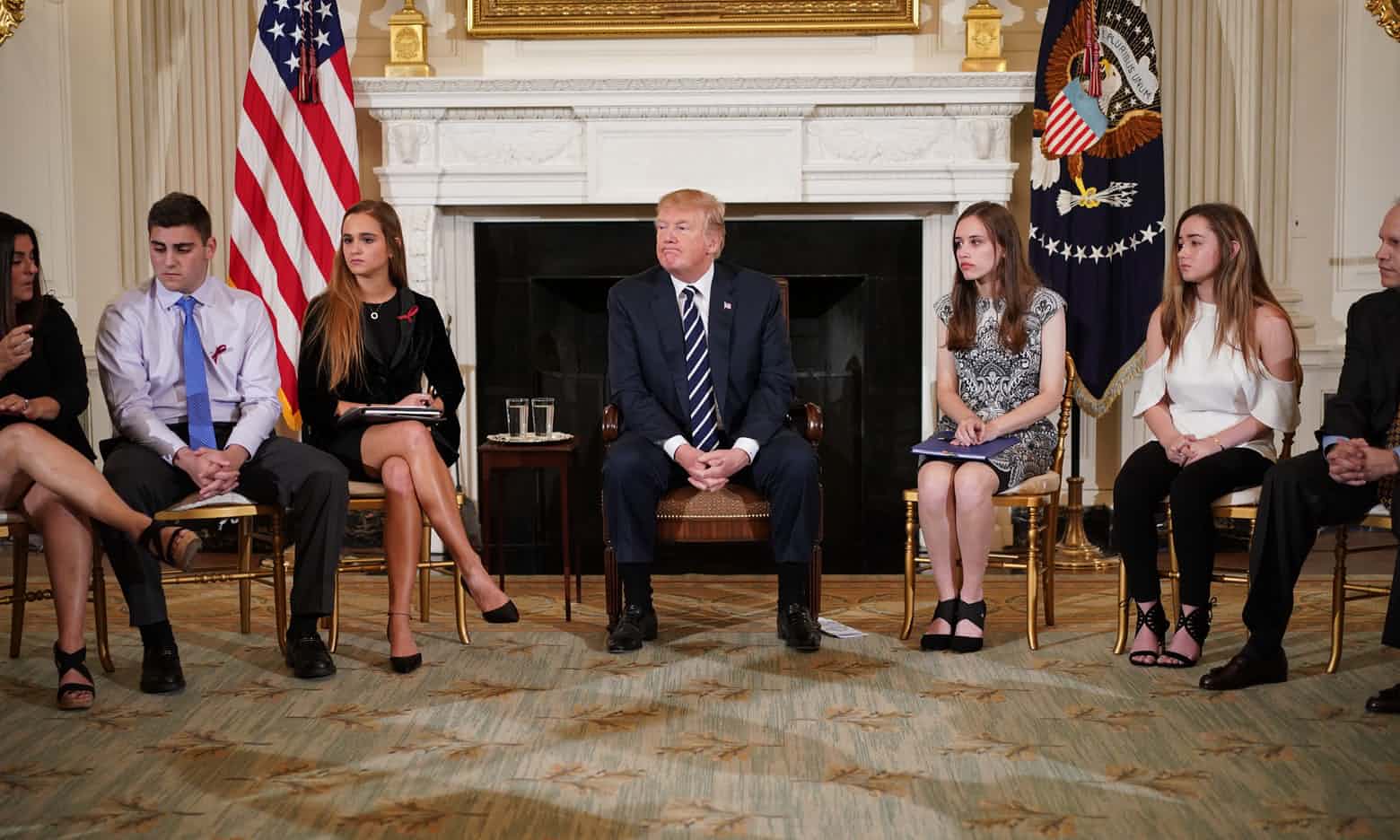 Marjory Stoneman Douglas High School had an armed guard on duty during the attack, but he never encountered the shooter, and never discharged his gun. A 2013 poll by the National Education Association found only 22% of teachers approved of the idea of arming staff, with 68% of teachers being opposed. 72% of teachers said they would not want to carry a gun even if the law permitted.

The NRA, which contributed around $30m to help elect Trump, find a ban on some types of weapons to be unconstitutional, a violation of the Second Amendment of the US Constitution’s guarantee of the right to bear arms. They do accept some changes to the background check legislation, and Donald Trump’s ban on gun “bump stocks”. Bump Stocks enable a rifle to shoot hundreds of rounds a minute and were used by a gunman who killed 58 concert-goers in Las Vegas in October 2017.

At a heated town hall meeting in the state of Florida itself, Senator Marco Rubio claimed that banning semi-automatic weapons was “a position well outside the mainstream”, despite survivors of the shooting entering the state capital and demanding lawmakers restrict sales of assault rifles. Students in Chicago, Pittsburgh, and Phoenix walked out of classes in solidarity.

Images of survivors and protesters in the wake of the shooting in Florida (Source: BBC)

The public mood towards guns appears to have shifted, and the ‘solution’ of introducing more firearms into schools in the wake of yet another mass shooting is proving extremely unpopular. Young survivors of the shooting are adamant that it is ridiculous for a 19-year-old who cannot legally buy a drink to be able to purchase a semi-automatic rifle, and are determined to remove such guns from the public space as much as possible. It remains to be seen whether the legislation will follow the public and change.

Brexit and the Art of Saying Nothing

An Ethiopian Revolution Is On The Horizon

Theresa May: Brexit Referendum Would Do ‘Irreparable Damage’ To British Politics