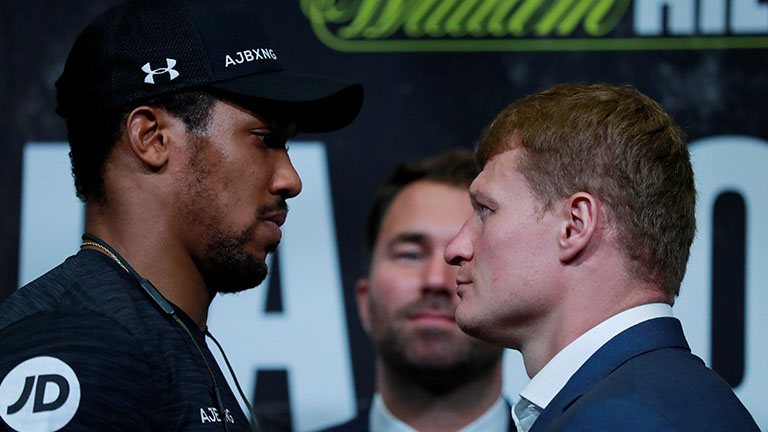 Unified Heavyweight Champion Anthony Joshua faces a stern test against fellow Olympic Gold medalist Alexander Povetkin on Saturday, in a fight guaranteed to provide fireworks to a packed Wembley crowd and millions watching around the world.

Joshua will defend his WBA (super), IBF and the lesser regarded IBO heavyweight title against Russia’s Alexander Povetkin, who is a former heavyweight champion himself, holding the WBA (regular) title from 2011-2013. Povetkin was a decorated amateur fighter, winning the 2004 Olympic Gold medal in the superheavyweight division. Povetkin has only lost 1 of his professional 35 fights, to the legendary Wladamir Klitschko by a unanimous decision in 2013. (Of course, Joshua and Klitschko have history of their own).

The Russian is on a streak of 8 consecutive victories, including a devastating knockout of Britain’s David Price on the undercard to Joshua’s clash with Joseph Parker in March. He possesses very good stamina and punching power, and will look to negate Anthony Joshua’s superior reach by fighting at a close range, with the Briton standing at a towering height of 6’7. Povetkin is a comparatively shorter 6’2, and will be looking to catch the champion with some of his signature hooks.

Anthony Joshua will need to be at his best to improve his impressive professional record to 22-0, especially against a fighter who has not been knocked out in any of his professional fights. In his recent bout against Joseph Parker, he showed the ability to fight behind his jab, and won a unanimous decision after controlling the majority of the 12 rounds. But at heart, the champion loves a scrap, and will be hoping to land his devastating over hand right and uppercuts.

The clash of styles will guarantee an engaging match up, but Joshua’s versatility, reach advantage and Povetkin’s age (38) should result in a mid to late stoppage for the defending champion. After that, all road will lead to a clash with the winner with the pending Deontay Wilder/Tyson Fury clash in April 2019. There, Joshua may have the once in a generation opportunity to become the sport’s first undisputed heavyweight champion since Lennon Lewis.

The Curious Case of Bobi Wine

Sadiq Khan: People Have A Right To Change Their Minds On Brexit

Is Megan Rapinoe Inspiring a New Age of Dominance in Women’s Football?

2019 NBA All-Star Starters: How the fans, players and media voted