There really is nothing like having a good laugh at a politician’s expense. A large portion of their job includes having to be on their best and most respectable behaviour at all times, in order to win people’s support, whilst constantly in the public eye. Yet this just means their mistakes (and subsequent attempts to backtrack from them) are all the more amusing, and can remind us that deep down, they can be idiots like the rest of us.

However, in the age of President Donald Trump, the glorious art of the political gaffe has sadly become an increasingly rare thing. Ironically, this is because he makes so many mistakes, and acts with such a lack of decorum so often, that we have all become completely desensitised to them. He doesn’t worry about the mask of professionalism slipping, because it was never really there in the first place. So the following list of political errors highlights how much has changed in what we have come to expect from our politicians since Trump took power. But mostly it just gives us a good chuckle.

Holding a massive festival-style rally celebrating your party and its leading members in the days following an election victory would be cringeworthy enough. Neil Kinnock’s Labour party, though, decided to hold their big election party before the actual election in 1992. What was presumably expected to drum up support and make the party seem like a credible government in the final days before the vote was widely mocked for its premature triumphalism. This was best summed up by Neil Kinnock bellowing “We’re alright!” (or “well alright” depending on who you ask) at a confused audience, like a tipsy dad trying his rock star act on karaoke night. The rest is history as Labour ended up losing to the Conservatives and staying out of power for another five years.

Despite being the frontrunner for the Democratic nomination in 2004, Howard Dean had just suffered a disappointing third-place defeat in the first primary in Iowa. After this setback, he reassured his supporters that together they would travel around the country, fighting back and winning. He listed all the states they would visit, until his speech reached a climax as he promised to go to Washington D.C. to take back the White House. So far, so good. But then, inexplicably: “YAAAAaaaahhh”. An unsettling cross between a roar and a squeal, it made him the party’s laughing stock – safe to say he did not win the Democratic nomination that year.

This is by far the most excruciating mistake of the bunch. Try to put yourself in Gordon Brown’s shoes here – imagine trying to respectfully listen to a woman complain about immigrants when you strongly disagree with her but can’t say so, then grumbling about her while your microphone is still on, having the footage played back to you on live TV, and finally having to go back to apologise to the enraged woman. As well as being horribly cringeworthy in itself, it was another career blow to an already unpopular Prime Minister, and losing working-class voters like Gillian Duffy, the woman in question, ended up costing him his job within a month of the scandal.

On the surface, India’s Rahul Gandhi has it all going for him. He is the beneficiary of good looks, a world-class education and most importantly, is part of a dynasty that includes several Prime Ministers, such as Jawarharlal Nehru and Indira Gandhi. Yet one minor issue stands in his way: he clearly doesn’t want to be there. Despite being essentially the leader of the opposition in India, he doesn’t seem particularly bothered about politics, and makes plenty of careless, high-profile mistakes. One of the best of many such mistakes is his apology to his audience during a speech that “you all are demanding a potato factory in your area, but you should understand I am an opposition leader. I cannot open a potato factory.” Expect to see potato factories spring up all over the country if he gets in at the next election, then. 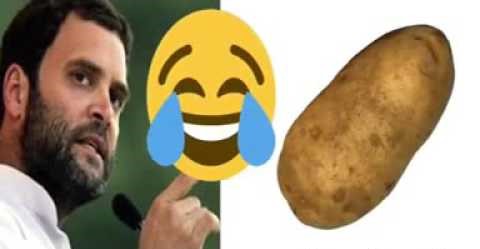 Gandhi will be relieved to hear that his is not even the most infamous potato-based gaffe on this list. That dubious honour goes to former US Vice President Dan Quayle, who, during an election campaign, convinced a 12-year-old that his correct spelling of ‘potato’ was wrong, and needed an ‘e’ on the end. He later claimed he was relying on cards provided by the school, which he questioned but decided not to challenge, as though having a Vice President who lacks the confidence to know whether he can actually spell potato correctly is that much better than one who just can’t spell it. At least Trump in the same situation would have the conviction to follow it through, and argue that his is the right spelling and that the English dictionary’s version is fake news.

At a time of instability in Europe, many see Merkel as a safe pair of hands. She has been Germany’s chancellor for over 12 years, and has developed a reputation for quietly and determinedly getting things done without any real drama or controversy – yet this video is a great reminder that no matter how much prestige or respect you accrue while in power, you can always make a pillock of yourself by having no idea where your country is on a map, to the delight of giggling teenagers.

We’ve all been in that situation where you don’t know the words to a song you should, whether it be through missing a hymnbook in church or not knowing Africa by Toto as well as everyone else seems to in a nightclub. Not knowing the Welsh national anthem when you’re the Welsh Secretary is definitely worse than either of these, but in any case, trying to mime lyrics you clearly don’t know just doesn’t work. It has never worked and it never will, John Redwood.

Last, but certainly not least, we have John Ellis Bush Sr. It’s very easy to forget that at one point Jeb Bush was supposedly a Republican frontrunner for the 2016 election, one who would surely beat outsiders like Donald Trump. Yet his campaign’s trajectory was the exact opposite of Trump’s. If Trump was a ‘Teflon man’, with no scandal ever sticking to him, Jeb was a Velcro man. Strictly speaking he never did anything wrong, particularly compared to Trump’s antics, but a succession of minor yet bizarre and embarrassing mistakes turned him from a credible candidate with significant political experience into a tragic figure of almost Shakespearean proportions. Whether it was his regular mauling by Trump in TV debates, getting kicked out of a venue half way through making a speech, or having to ask his audience to clap him, it seemed as though not only was his campaign futile, but he was fully aware it was. The video below, in which Jeb fully embraces the hopelessness of it all, sums up perfectly why, particularly in the age of the scandal-proof politician, we may never see his like again.