The Labour Party has recently been held accountable, yet again, for anti-Semitism within its ranks. That is, members of the party are exhibiting open hostility to, and prejudice against, Jews.

Luciana Berger, a Jewish Labour MP, re-tweeted a Facebook comment made by Jeremy Corbyn back in 2012 on a photograph of an anti-Semitic mural. Mear One, the street artist and author behind the mural, complained to his followers about plans for it to be taken down, to which Corbyn responded: “Why? You are in good company. Rockerfeller destroyed Diego Viera’s mural because it includes a picture of Lenin.” The Labour leader’s comment endorsed the image, drawing it into a debate of free speech, despite its horrifyingly racist message.

Corbyn has now described the mural as “deeply disturbing”.

The anti-Semitic mural in question (Source: The Guardian)

The mural is a caricature of Jewish men playing monopoly. They are depicted with rotund bellies and inflated hooked noses, exchanging evil expressions over a table stacked with money, resting on human bodies. The image echoes Nazi propaganda, used by Hitler and his allies to convince the German people that their Jewish neighbours could take over the world at any moment. These sorts of images were used as justification for the Holocaust.

It is hard to believe Corbyn’s own justification that he commented on the post before looking closely enough at the image, which is incredibly striking and far from subtle.

Origins of Anti-Semitism in the Labour Party

Anti-Semitism in the Labour Party emerged in the early 1970’s. Dave Rich’s book: The Left’s Jewish Problem: Jeremy Corbyn, Israel and Antisemitism, traces it back to the Young Liberals of the British Liberal Party. They identified Israel and its large, renowned Jewish population with “the establishment, with acquisition, with smug satisfaction, with, in fact, all the basic enemies”, as the Foreign Minister of Israel, Abba Eban, famously told the world in 1973.

These young liberal activists were the most enthusiastic and determined to bring anti-Zionist rhetoric to the forefront of the Left’s political agenda. That is, they actively opposed the existence of Israel, historically recognised as a Jewish state. They took the side of the PLO (Palestine Liberation Organisation) which has, for decades, resisted the right of Israel to exist as an independent state.

Corbyn is famously pro-Palestine, which has created the following problem: does he commit to the far-Left position of overthrowing Israel to create a new, non-Zionist (i.e. non-Jewish) Palestine? Or, does he commit to defending the right of Israel to exist, and support a two-state solution between Palestine and Israel? It’s been one of the longest internal conflicts Corbyn has faced since he became the Labour leader. Corbyn has now pledged to support a two-party state, clarifying his views on the issue. He has attended various meetings with Jewish groups in the past two years, in which he has publicly committed to the right of Israel to live within secure and recognized boundaries as part of a two-state solution to the Israel-Palestine conflict.

Naz Shah, MP for Bradford West, was the first subject of a number of anti-Semitic allegations under Jeremy Corbyn’s watch. Shah published a graphic back in 2014, a year before becoming a Labour MP, suggesting that Israel should simply relocate to the US, that way the Israel-Palestine conflict would quickly become a “problem solved”. Shah also likened Israel to the Nazis. Shah falls into the simple, ignorant rhetoric that Israel and its Jewish community are solely to blame for a far more complex state of affairs.

Shah was suspended from the party temporarily, but was eventually reinstated as a Labour MP. 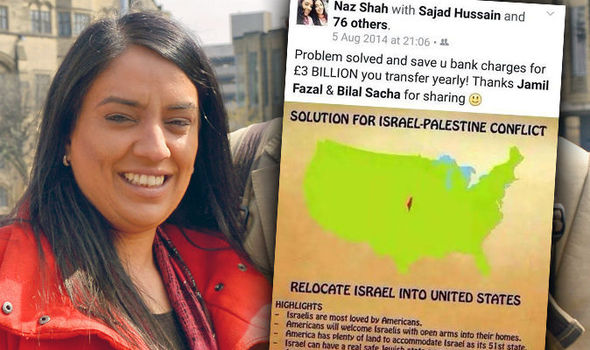 Naz Shah with the offending graphic superimposed beside her (Source: Daily Express)

The second allegation came when former London Mayor, Ken Livingstone, defended Shah’s anti-Semitic views on BBC Radio London: “When Hitler won his election in 1932,” Livingstone told the audience, “his policy then was that Jews should be moved to Israel. He was supporting Zionism before he went mad and ended up killing six million Jews.” These comments actually insult Zionism, which is defined as the re-establishment of a Jewish homeland. A megalomaniac who theorised that getting rid of all the Jews in Germany could solve their ills, initially by sending them to Israel, is not the same as Zionism. For Hitler, it certainly wasn’t ever about helping the Jewish population rediscover their identity, as Livingstone insists it should be interpreted. Livingstone is still suspended from the party, pending a further investigation.

Investigations like this one into anti-Semitism within the Labour Party have dragged on for nearly three years, not treated with the seriousness that they deserve. Human rights campaign group, Liberty, conducted their own investigation in 2016. Off the back of this investigation, which Corbyn claimed he supported, the Labour leader stated: “Our Jewish friends are no more responsible for the actions of Israel or the Netanyahu Government than our Muslim friends are for those various self-styled Islamic States or organisations.” This invited immediate backlash on Twitter, as the Labour leader was seen to be directly aligning ISIS and Israel. By reducing the state of Israel to terrorist comparatives despised by Europe, Corbyn was simply spouting the very same anti-Semitism that he was supposedly trying to preach against.

Oxford University Labour Club have also been in the news over the past few years, following anti-Semitic behaviour. This has included the frequent use of the word “Zio” as a derogatory term against Jewish students, alongside discussions that Zionists were rigging British elections and that European attacks on Jews were justified because of Gaza.

Baroness Julia Neuberger, Senior Rabbi at West London Synagogue, told the BBC in 2016 that, “more than anything else”, it is these allegations against the Oxford University Labour Club which prove Labour’s entrenched problems with anti-Semitism. Neuberger also went on to say that “I think that it’s a tat to Jeremy Corbyn becoming leader and therefore old [issues], some of them existing in militant for those of us old enough to remember all that, with the hard left and a particular criticism of Israel.” Neuberger recognised back in 2016 for the first time that anti-Semitism was a very real concern for the Labour Party, but it seems that this concern has not been concern enough to invite action.

How are Labour responding?

Now, Corbyn and his Labour Party are being held accountable, by the media, by the people, and by the Jewish community themselves, whom Corbyn has allowed to be continuously attacked by various far-Left party members.

Labour MP Andy McDonald spoke to Emily Maitlis on BBC Newsnight, describing the Jewish protest in response to rising anti-Semitism in the Labour Party as “disappointing”. When Maitlis called him out on his use of the word “disappointing” to describe a rightful cry for justice, McDonald went on to say: “Well, people have got to express their views, that’s absolutely acceptable, but it’s disappointing that we’ve got in this situation.” McDonald’s attitude is incredibly dismissive, much like the dismissive stance Labour have taken on the issue for the past few years.

This soft approach is apparently at an end, as we are hearing claims that Corbyn is tackling anti-Semitism “head-on”. It begs the question, what will this “head-on” approach look like, and how will the Labour leader weed out what has proven to be far more than just a few “bad apples”? 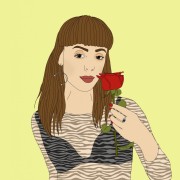 Ruby Hinchliffe
Ruby is a Classics Graduate from Bristol. She has a particular interest in political affairs, art history and cultural debates. Currently, Ruby works as a Sales Development Rep at WP Engine, and writes as a Journalist for TCS.

The Power of Silence in an Age of Noise