Female Genital Mutilation i.e. FGM is an ongoing topic for discussion that has brought to light a lot of controversy in the area of circumcision. FGM also known as female circumcision is a worldwide cultural practice carried out in over 28 countries in Africa such as Sudan and Somalia, where 98% of the females are subjected to carry out the practice. The practice is said to be a symbolic representation of female chastity. An assurance of safeguarding both a woman’s purity and the honour of her family. In some parts of Nigeria (and other parts of the African continent), female circumcision symbolically represents ‘the cutting out of the devil’ (the clitoris) because it is the most sexual pleasing part of the female genitalia. This to many sounds barbaric and in fact inhumane which is why it has been a criminal act in the UK since 1985, as it was seen as a form of violence against females.

FGM has become one of the most talked about topics in British politics which is why, for the general election that just passed in June, parties such as UKIP promised to confront and deal with the continuity of FGM in the UK. They announced plans for ‘mandatory annual medical checks for girls in ‘at-risk minority’ (read: black) groups in a bid to stop female genital mutilation in Britain. 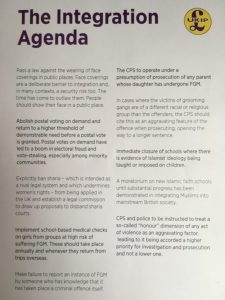 Statistics show that from April 2015 to March 2016 there have been 5,700 new cases of FGM in the UK, 18 of the cases where undertaken in the UK, including 11 women and girls who were also born in the UK.  FGM is an ongoing battle here in the UK as many families still get skilled cutters from their home countries to cut their daughters. This is against the law, which is where the major issue is. People with customs such as FGM feel it is fair and necessary for them to practice it wherever they wish, regardless of the law, but no cultural practice should be above the law. In years to come, this problem will hopefully be completely resolved as many movements and talks about FGM have risen over the last 32 years with the objective of re-educating the minds of the people in the UK and around the world. However, the major question still stands whether circumcision should be allowed at all for both males and females in the UK.

If you or someone you know is at risk of FGM, get in touch with charities such as NESTAC and FORWARD.

The lives of black men in the UK have long been adversely affected ...