Donald Trump, the President of the United States of America, took to twitter on Saturday to reassure people that he was ‘like, really smart’. His tweets come after a new book about Donald Trump claimed that his staff thought he was ‘semi-literate’.

….Actually, throughout my life, my two greatest assets have been mental stability and being, like, really smart. Crooked Hillary Clinton also played these cards very hard and, as everyone knows, went down in flames. I went from VERY successful businessman, to top T.V. Star…..

Michael Wolff is a total loser who made up stories in order to sell this really boring and untruthful book. He used Sloppy Steve Bannon, who cried when he got fired and begged for his job. Now Sloppy Steve has been dumped like a dog by almost everyone. Too bad! https://t.co/mEeUhk5ZV9

Michael Wolff’s book, “Fire and Fury: Inside the Trump White House”, became an immediate bestseller, despite its spelling and grammatical errors.

Sorry losers and haters, but my I.Q. is one of the highest -and you all know it! Please don't feel so stupid or insecure,it's not your fault 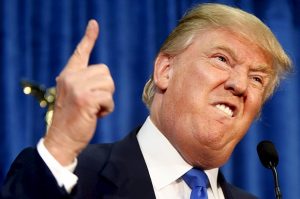 Here are a series of tweets by Trump over the years. Sit back and get ready to read some of the best tweets you’ve ever seen.

I will be announcing THE MOST DISHONEST & CORRUPT MEDIA AWARDS OF THE YEAR on Monday at 5:00 o’clock. Subjects will cover Dishonesty & Bad Reporting in various categories from the Fake News Media. Stay tuned!

A reminder that Donald Trump’s favourite TV station is Fox News, the very news channel that once reported that Muslims in Birmingham had taken over the UK city and made it a Muslim-only area “where non-Muslims just simply don’t go“.

He has an opinion on pretty much everything:

I have never seen a thin person drinking Diet Coke.

Robert Pattinson should not take back Kristen Stewart. She cheated on him like a dog & will do it again–just watch. He can do much better!

.@AlexSalmond, Wind turbines are ripping your country apart and killing tourism.Electric bills in Scotland are skyrocketing-stop the madness

He even graciously critiqued the government, in particular his hate towards Obama:

Obama is, without question, the WORST EVER president. I predict he will now do something really bad and totally stupid to show manhood!

An 'extremely credible source' has called my office and told me that @BarackObama's birth certificate is a fraud.

How amazing, the State Health Director who verified copies of Obama’s “birth certificate” died in plane crash today. All others lived

This election is a total sham and a travesty. We are not a democracy!

He has always been a ‘family’ man:

My daughter Ivanka has been treated so unfairly by @Nordstrom. She is a great person — always pushing me to do the right thing! Terrible!

He praises himself as the man who saved Christmas:

People are proud to be saying Merry Christmas again. I am proud to have led the charge against the assault of our cherished and beautiful phrase. MERRY CHRISTMAS!!!!!

He can’t take criticism, even from other governments. When Theresa May spoke about his actions tweeting fake videos, he responded with:

.@Theresa_May, don’t focus on me, focus on the destructive Radical Islamic Terrorism that is taking place within the United Kingdom. We are doing just fine!

When he tweeted how he was ‘Time’s Person Of The Year’, Time magazine went on to name The Silent Breakers as their ‘People Of The Year’, a slap in the face for Trump who has been accused of sexual harassment on many occasions.

Time Magazine called to say that I was PROBABLY going to be named “Man (Person) of the Year,” like last year, but I would have to agree to an interview and a major photo shoot. I said probably is no good and took a pass. Thanks anyway!

He has the ability to start world wars with his tweets, but does that stop him? No.

Why would Kim Jong-un insult me by calling me "old," when I would NEVER call him "short and fat?" Oh well, I try so hard to be his friend – and maybe someday that will happen!

Of course there are some tweets that have worked against him. The following tweet was used by the Supreme Court to overturn the ‘travel ban’

That's right, we need a TRAVEL BAN for certain DANGEROUS countries, not some politically correct term that won't help us protect our people!

And of course, it wouldn’t be a Donald Trump tweet compilation without covfefe

We’re placing bets on which one of his tweets will be the one that loses him his presidency.

As jerky valuations on Wall Street signal another week of tanking tech shares, ...