In light of the recent Coronavirus pandemic, mental health has been at the forefront of many discussions....
Read more

Munya J. Raradza
Munya J. Raradza was born in England and is of Zimbabwean descent. A big sports fan, Munya is also a track athlete who has competed internationally. Including winning national titles at a junior and collegiate level. A history graduate of the University of Birmingham, Munya has always had a strong passion for writing. Currently, he is an editor for TCS who aims to provide engaging news, with a dash of critical thought. Follow Munya on twitter @JayRaradza.

As early as 2012, Colin Kaepernick turned heads as he assumed the position of number one quarterback for the San Francisco 49ers. During this period, Kaepernick was highly regarded by head coach Jim Harbaugh, who brought Colin as a replacement for longtime starter Alex Smith. Initially considered a controversial move, Kaepernick went on to silence the critics by rushing 181 yards against the Green Bay Packers, setting a new NFL single-game record for a quarterback. He then went on to lead the 49ers to Super Bowl XLVII in New Orleans. Kaepernick’s performance in the 2012-13 postseason garnered him well-deserved notoriety and publicity. In 2013, he was awarded an ESPY for ‘Best Breakthrough Athlete’. Fast forward to 2017, Kaepernick’s name is affiliated with a different sort of hype. And now the critics have conjured up a much bigger ruckus. Kaepernick’s kneeling during the national anthem resulted in the talented athlete losing his job and consequently being ‘blackballed’ from the NFL. Over the last couple months, Kaepernick’s critics managed to twist the player’s narrative and mislead the masses into thinking that this was a shot at American patriotism.

In an arena where such issues are rarely spoken about, Kaepernick has forced us to reflect on the significance of race within the sporting world. In an organisation where 68% of its employees are of African-American heritage, the NFL supersedes any diversity quotas set by the majority of modern-day corporations. However, the initial reaction of its predominantly white-male owners suggests a reluctance to initiate real change. August 27th, 2016 was the first moment when Kaepernick sat down for the national anthem. 8 months later he leaves the 49ers , after ‘voluntarily‘ opting out of his contract. It took 14 months, amidst the slaying of black teens throughout the U.S., for NFL GM’s to show solidarity with Colin and fellow players who took the knee. Sadly, the catalyst for this action was the vulgar statements made by an ill-mannered and ill-tempered president. The displaying of solidarity at this point in time, causes one to re-evaluate the motivations of those NFL owners. 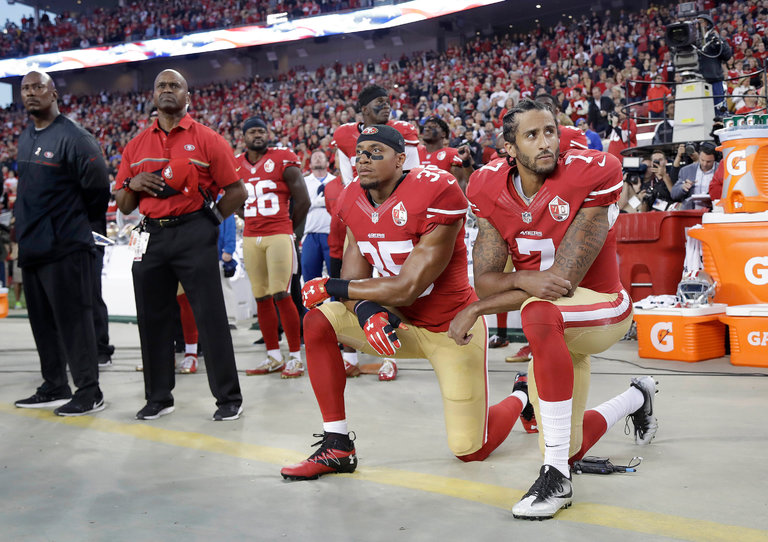 Kaepernick’s actions spoke strongly to the millions of African-Americans, who for generations, have been subjected to the ills of institutional racism. Kaepernick’s protest was a brave attempt to shed light on these issues. Instead, the likes of Donald Trump attempted to reduce Kaepernick’s actions to a mere attack on the U.S. national flag. This within itself, showed the President’s reluctance to face the harsh realities of his country’s past and have an honest conversation about racial tensions that have riddled the country since its inception.

Now, handed the ACLU ‘Courageous Advocate’ Award and nominated as a finalist for TIME’s person of the year, it appears that Kaepernick is getting the positive recognition he deserves. However, it is important that this discussion, which was amplified 2017, continues to feature prominently in 2018. Kaepernick’s protest opened the floor for further dialogue on racial tensions across the Western hemisphere. A conversation which is yet to be properly had.

In light of the recent Coronavirus pandemic, mental health has been at the forefront of many discussions. Staying indoors and living in...
Read more
Culture

Racism is not short of its involvement in popular discussion. As debates of race and identity have increased tenfold, due mostly to...
Read more
Common Sense On: Coronavirus

For a nation that loves any excuse for a good old party, frustrations were riding high as Victory in Europe's 75th anniversary...
Read more
- Advertisement -

The UK's NHS staff are tasked with facing coronavirus on a daily basis. They have struggled with challenges such as the need...
Read more

Is Rihanna in a durag more than a fashion statement?

In March this year, Rihanna made British Vogue history wearing the ‘durag’, the first cover star to ever wear the garment. Editor...
Read more

The COVID-19 pandemic that has gripped the United Kingdom, and the globe, has understandably left many feeling anxious. As the nation enters...
Read more
- Advertisement -