The last few months have been seen to be somewhat revolutionary with hundreds of women working in the film and television industry coming forward about sexual assault and inequality.

Yesterday was no different. At the 75th Golden Globes, hundreds of stars donned black outfits to support the Times Up movement. The initiative was in support of working class women, with many women wearing all black dresses and men wearing Time’s Up pins. 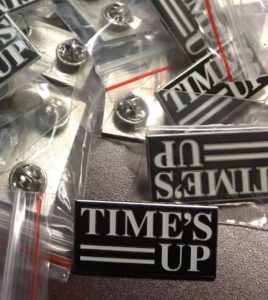 Time’s Up Pin worn by many at the Golden Globes (photo: Instagram @boothmore)

Celebrities wore black to highlight the harrassment and give platform to the issues faced by women in the industry. Celebs who wore the black outfits include: Milly May Brown, Oprah, Angelina Jolie, Justine Timberlake and Reese Witherspoon.

People took to Twitter to voice their disappointment. Blanca Blanco, who wore a bright red slashed dress is one of the celebs being dragged online.

“Blanca Blanco doesn’t necessarily have to conform to the #WhyWeWearBlack dress code, yet to show up in a gown that’s not only bright red but extremely skimpy seems like a crass f*** you to the whole movement,” wrote one social media user.

This isn’t the first ‘campaign’ of this type we’ve seen. Activism has been reduced to small pins and badges for some time now. In 2016, many people started wearing safety pins to show solidarity with minorities, members of the LGBT community and immigrants after visibly Muslim women were being targeted by racists. The idea was that a safety pin would show that the wearer supports and will stand by any assault or abuse faced by those women. Of course the reality is that it made the wearer feel like they were doing something. Back in 2016 people took to twitter to talk about how ridiculous it was that activism was now being reduced to a safety pin. Slacktivism was a new coined term. Now, in 2018, we are seeing the same. It isn’t enough. while on the one hand the ‘black dress activism’ was about supporting women, on the other it was berating those who didn’t get the memo. Again, women are the ones being targeted. It is also interesting to note that the colour black was chosen, a colour that most men going to an awards ceremony would be wearing anyway, making it remarkably onerous for the women.

Not everyone wanted to call out those women, some defended the actions of many to not wear black to the celebrated awards ceremony,

“I love red, wearing red does not mean I am against the movement. I applaud and stand by the courageous actresses that continue to break the cycle of abuse through their actions and fashion style choices. It is one of many factors leading women to a safer place because of their status. I am excited about the #TimesUp movement; true change is long overdue.”

The issue is bigger than my dress color #TIMESUP

While initiatives like this are started with good intentions the meaning can get lost in all the glamour. Safety pins and badges remain just that, as wrist bands in the early 00’s remained just that, a fashion accessory. Activism is not an accessory, it is not fashion and it is not about who’s wearing what. The real message has been lost. Instead of supporting women the Time’s Up campaign has become a statement. People who have acted questionably in the industry took part.

Here we come!! And DAMN, my wife is hot! #TIMESUP  #whywewearblack pic.twitter.com/q0XWH6XR68

Justin Timberlake, wore the pin, even tweeted about Time’s Up but is still taking part in Woody Allen’s new film Wonder Wheel. The pin, the hashtag, the black clothes, they all  mean  nothing. It’s not what you say, but how you act. If 14 year-old Finn Wolfhard, who plays Mike Wheeler in Netflix’s hit Stranger Things, can fire his agent because of sexual abuse allegations, grown men can do better than jump on the bandwagon and doing the bare minimum.

This woman, is not impressed.

Golden Globes: Winners, Losers & Everyone In Between.