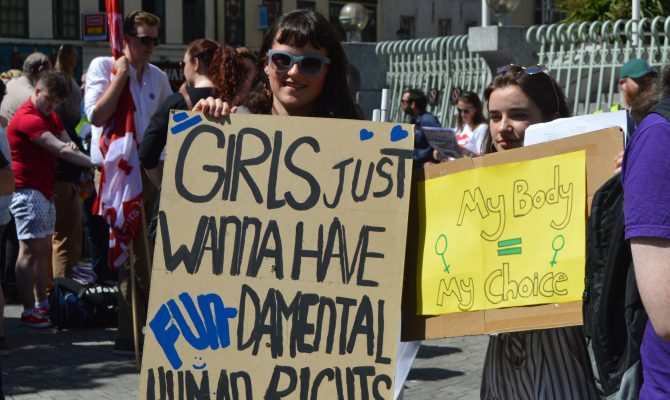 What was the law in the Republic of Ireland?

The 8th Amendment of the Irish Constitution was voted into the Constitution of the Republic of Ireland in 1983. It effectively made abortion illegal by equating the life of the woman with the life of the unborn, thus banning abortion even where the pregnancy places a woman’s life at serious risk, in cases of rape or incest, or cases of FFA (fatal foetal abnormalities). The amendment reads as follows:

What happened when an Irish woman needed an abortion?

Due to the constitutional ban on abortion, women who wished to terminate their pregnancy for whatever reason were expected to go to full term. Those who had the money to do so travelled to Great Britain in order to access legal but privately-funded abortions. According to the Marie Stopes UK, every year approximately 4000 women from the Republic of Ireland or Northern Ireland travel to Britain to have an abortion. Many women who have not been able to afford to travel to Britain have attempted to access abortion care illegally by ordering abortion pills online. According to Together for Yes, the national Irish campaign to remove the eighth amendment, in doing this these women have risked up to 14 years in prison.

What was the referendum?

The referendum on repealing the 8th Amendment to the Irish Constitution was called after the Irish Citizens’ Assembly voted to recommend the introduction of unrestricted access to abortion in 2017. The referendum was held on the 25th of May 2018.

Who could vote in this referendum?

What was on the ballot paper?

The referendum asked voters if they wanted to approve the 36th Amendment to the Constitution, thus removing the 8th Amendment and inserting a provision in its place that “may be made by law for the regulation of the termination of pregnancies”.

In the Republic of Ireland, the current legislation will remain in place until the laws are changed through Ireland’s Parliament. It is expected that abortion will be provided within a restricted time period of up to 12 weeks through the public healthcare system – fulfilling the ‘yes’ campaign’s call for free, safe, and legal abortions.

What about Northern Ireland?

All eyes are now on Northern Ireland and its strict abortion restrictions, with the wounds of over 18 months without a devolved government at Stormont being laid bare for the world to see. Northern Irish pro-choice activists are calling on Westminster to act, despite liberal politicians and activists in Britain calling for a non-binding referendum in Northern Ireland concerning the extension of the 1967 Abortion Act. What is important to remember is that the campaign to legalise abortion across the island of Ireland is not a new issue or a new campaign. Now that a grassroots feminist movement in the Republic of Ireland has succeeded in its objective, momentum is only building to ensure that similar movements are taken seriously in Northern Ireland.

Great news that the Republic of Ireland has voted to #Repealthe8th to support a woman’s right to choose.

Big day for Ireland today. Not normally one for asking people to vote one way or another. But as an Irish son and brother, no state should have the right to tell a woman what to do with her body. #Repealthe8th

The victory for women’s rights in Ireland is no small one, we just hope that Northern Ireland follows suite.

Ruth is a final year undergraduate student at the University of Edinburgh, originally from Northern Ireland. Her aim in life is to try and make the world a little bit better and care about the right things, which includes (but is in no way limited to) storytelling, politics, culture, and coffee.